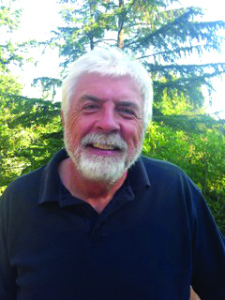 Alex Paul lives in Portland, Oregon in the winter and on the Oregon coast in the summer with his wife Laura Ross-Paul. Their summer home is a small log cabin with a yurt for Laura’s art studio.Trained as an Industrial Engineer at Oregon State University, he tried a variety of careers before settling into a career as a real estate developer.He began hunting when he was 20 in 1968. He hunts for deer and elk in Oregon, as well as hunting for elk in New Mexico. Hunting trips in years past have included elk hunts in Colorado, Idaho, Utah and Washington and antelope hunting in Wyoming.Alex’s fishing career began when his family moved into a house on the North Santiam River when he was twelve years old and he found a fishing pole left in the garage. While his father was not interested in fishing, his mother faithfully accompanied him on trips to a special fishing hole on the river behind an abandoned wooden dam until she was confident he would not fall in and drown. Then he fished the river accompanied only by his two loyal dogs. That early interest in trout fishing transformed into a passion for salmon fishing and now Alex keeps a deep sea fishing boat, Ajax, in Astoria, Oregon. Friends and children join Alex in the summer crossing the Columbia River Bar to fish the Pacific Ocean.When he is not hunting or fishing, Alex surfs the Oregon Coast and skis the Oregon Cascades. And when he can he takes his two loyal dogs.This love of the outdoors has translated into a rich base of experience to draw on in writing the Arken Freeth novels. Additional activities such as archery, fencing, Tae Kwon Do and horseback riding, he owned a horse during his college days, also inform his writing.Other writing projects by Alex, (available on Amazon), include “Suicide Wall” a novel about war veteran suicide, and “They’re Mine and I’m Keeping Them” a non-fiction book written by Alex, Laura Ross-Paul and Dr. Peter Littrup, about Laura’s triumph over breast cancer. Laura avoided a mastectomy in 2003 using cryoablation, a technique pioneered by Dr. Peter Littrup. She remains cancer free.Look for other titles in the Arken series in the coming years.